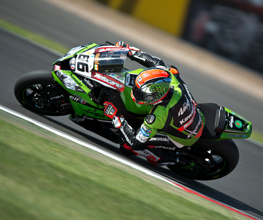 Winning the 2013 championship for KRT was the completion of one part of Tom Sykes’ journey as a true top class rider. The gritty Yorkshireman came close to winning the 2012 and 2014 titles with Kawasaki and these near misses have only redoubled his efforts to be champion yet again.

Sykes enjoyed his first Superbike World Championship wildcard rides in 2008, when he took a second place finish against the more established riders on home soil. He has not always been a four-stroke star, having preferred the feel of two-stroke racing bikes in his early career. Competing on his grandfather’s 600 Kawasaki road bike for a short time in the UK, just to understand how a four-stroke machine worked around a circuit, Sykes soon moved into the British Supersport Championship proper. He enjoyed almost instant success and was runner-up in the 2006 season. Paul Bird Motorsport picked up Tom for a season of BSB racing in 2007 and five podium places contributed to a fine top six ranking, in arguably the toughest domestic championship there is. A year later and after posting race wins in the UK series for another team, and also taking a podium in the British round of the World Superbike Championship, Tom was in a strong position to be signed for WSB full time in 2009. A tough first year, marred by injury towards the end, was not in Tom’s pre-season script, but he did impress on occasion, and finished ahead of many bigger WSB names. In 2010 – and now signed for Kawasaki - it took some time for Tom and his team to get the very best out of the previous generation of Kawasaki Ninja ZX-10R. After a victorious return to BSB racing for a one-off meeting at Brands Hatch the final few SBK races brought strong double-digit points scores, and almost saw Tom back on the podium again. For 2011 Sykes was retained to help develop and race the all-new Ninja ZX-10R, tasks which brought rewards as the bike blossomed as a real force at a variety of different circuits. Almost from the start of the year Sykes was posting performances that finally won him his first race victory at this level. The 2012 season was another positive turning point for Sykes as he scored four race wins, and a gigantic tally of Superpole prizes for being fastest qualifier. His championship win in 2013 was the highpoint of his career – so far. Only missing the title last year by six points, and with more race wins that year than any other rider, means Sykes is even more determined to sit atop the latest era of SBK competition by the end of the 2015 season.